Pastel Infographics and the Pitfalls of Online Activism

In between swipes of gym pics, selfies and boomerangs, it is no rarity to stumble upon a frenzy of activist posts shedding light on political issues when tapping through the story bar on Instagram. In the last couple of weeks, Instagram stories were dominated by pastel-hued posts of lifeless bodies in Bucha, violent mosque raids in East Jerusalem, and devastating airstrikes in Mariupol – decorated with a title in the extra swirly font, colour-coordinated with the pastel background. However, Instagram’s attention span is short: activist posts gain dominance over the story bar when interest and traction of the political issue at hand are high. But just as quick as a specific political issue can become part of someone’s online persona, fatigue surrounding the same topic kicks in, resulting in a return to the status quo: the use of Instagram stories for the function of social showcasing – a phenomenon especially visible during the orange flooded stories of Dutch Kingsday celebrations, which overshadowed Palestinian and Ukrainian activism posts.

The power of Instagram activism is undeniable with its almost 1.2 billion users across the globe, becoming an important medium for fostering political opinions and spreading awareness on issues of societal relevance. However, given the short-lived, unstable nature of activism on social media, it is unclear whether online activism can really be seen as a proactive form of political participation especially since there has been a gradual shift toward online activism replacing traditional forms of participation.

It is important to mention that reposting and sharing infographics and videos with the “shocking images” warning on Instagram, Twitter and co. is in no way harmful per se. Using the far-reaching impact of social media to spread awareness is well-intended and important in politicising the platforms available to us. Yet it is key that this awareness spreading should not stagnate within the realm of the digital.

From the feed to the polls?

There is a profound significance of social pressure as an inducement to political participation – and if there is one thing that Instagram is excelling at, it is creating social pressure through comparison with other users. How come, then, if the spread of information and political knowledge on social media is at an all-time high, the electoral participation of the young is stagnating or even worse, decreasing in democratic nations of the West?

One potential reason is that many online activists feel like they have completed their democratic duties after reposting a call-for-action post, often ornamented with an animated sad face sticker. The reality is that social media is used as a quasi-democratic landscape to state political beliefs without actually having to engage in political discussions and arguments. It is easy to click away from a post that you do not agree with. The threshold of democratic participation online by reposting or tweeting is low, which is why such online activism often has a very blurred line with “slacktivism”. The pitfall here is that instead of online activism being used as an additional tool of participation to raise awareness, it is more and more seen and used as a replacement for the traditional forms of political participation. In an age where our social media posts are taken as reality, it is a fair concern that many users get in the habit of clicking “share to story” to fulfil their duty of political participation publicly in an attempt of virtue signalling while ridding themselves of moral guilt. Active political participation beyond social media is essential for democracy to function, so the abstraction through a shift to mere online activism presents a viable threat to democracy as a whole. 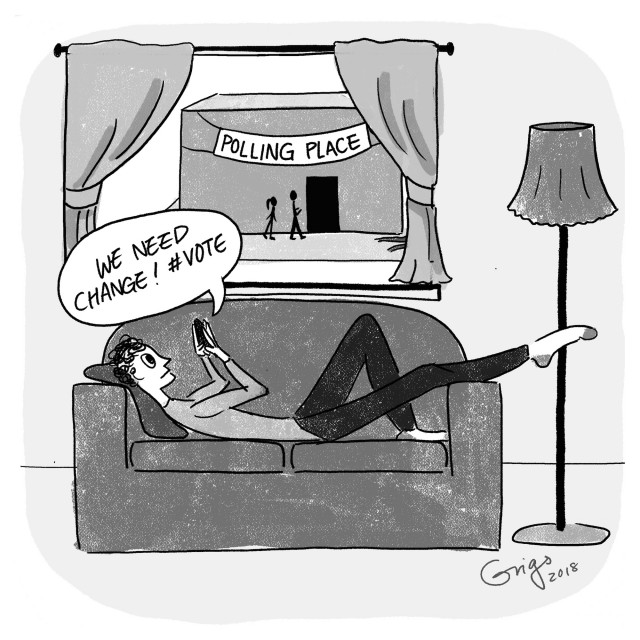 The sad reality is that the social pressure of being judged can outweigh actual passion for a cause, and we are left with young influencers posting about a variety of issues without ever reading more than the headline. The social pressure to take a stance on political issues on social media doesn’t only hamper political offline participation. It also creates an army of people that are misinformed about the issue at hand posting about the topic just to be “in” on the trend and to avoid ostracisation of being associated with the political enemy by not speaking out. In his essay on mass beliefs, Converse (1964) drew a picture of the “unsophisticated citizen” basing decisions not on deep-rooted ideology and belief systems but rather based on fluctuating and inconsistent attitudes with little understanding of their actual participation in politics. Social media activism often amplifies this phenomenon by creating unsophisticated users going with the trend of posting about one political issue and moving on to the next one as soon as another issue is more popular on the app. Next to creating pseudo-informed citizens, this behaviour has the consequence that factually incorrect information can be shared since users do not have the means and ambition of fact-checking the political information presented in the flashy infographics. Just recently, the famous Instagram user Soyouwanttotalkabout, (who is one of the main creators of the infamous pastel-coloured infographics) created a post including a racial slur in an infographic about immigrants, which was reshared and liked by thousands before the backlash began. Another example of online activism backfiring was the #blackouttuesday trend, where Instagram was flooded by black squares in an attempt to showcase solidarity, which eventually did more harm than good by overshadowing important announcements and information.

Everything that was said has to be taken with a grain of salt, though. It would be ignorant to neglect the enormous impacts Instagram activism had on a plethora of political issues, one of the most prominent ones being the BLM movement, which gained massive global traction through platforms such as Instagram. Increased participation (even online) is definitely a step in the right direction to becoming more politically aware. Yet it is vital that social media activism should not stand alone as a form of participation in an attempt to rid ourselves of moral guilt by simply clicking the share button. Go out, read, talk to people, debate, and argue. Maybe then – just maybe –  can political participation and social change transgress from our screens onto the streets.

The UNspoken advocacy for SA Previous
LinkedIn: Boon or Curse Next