Oil prices go negative, how can we see the light at the end of the tunnel?

Ups and downs, wars about market shares, power, and now a big bang virus, coronavirus?! Oil below zero is getting us crazy!

Oil has been the most important source of energy since the mid-1950s. Its products underpin modern society, especially supplying energy to the power industry, heat homes, and provide fuel for vehicles and airplanes to carry goods and people all over the world. Most than half of the petroleum is used for road transportation, we use oil to make diverse products, so it has an overwhelming influence in most of industries. However factors like social and political events, unexpected natural disasters, and health crises determine changes in its price. This year, the onset of coronavirus marked a turning point in economic markets globally. On the 20th of April, prices of oil got negative due to a surplus of oil, in combination with geopolitical matters and speculations due to the current global health crisis, which is leading to a possible economic slowdown.

Countries like The United States (US) have experienced development due to globalization which is possible because of oil, the material used to make plastic, and other products necessary to drive industries like communication, transportation, and energy. For that reason, the country has a high power in the oil market. The United States is the biggest oil producer along with countries like Saudi Arabia, Russia, and China. OPEC, the most important oil cartel, controls over 50% of oil supplies, comprised of countries like Saudi Arabia, Venezuela, and Iraq. The barrel of oil is a commodity, so revenue from trading the product is volatile and lower than the gains from elaborated goods. For instance, the gasoline that runs the transportation industry employs almost more than half of the total petroleum consumption.

The beginning of coronavirus, as other pandemics throughout history has brought negative outcomes in the economy as households should stay at home and the world is moving at a slower pace. No many cars in the streets, fewer jobs, a smaller food production, and many businesses are closing. So, it is logical that oil prices go down, however, who would think that they would change to such negative numbers? The oil organizations, especially the OPEC, have power over the supply of oil, but they cannot control demand. This fact, in combination with geopolitical matters, speculative, and the supply-demand dynamics due to the current global health emergency influence in the determination of oil prices.

How are prices settled? Why do traders like crude oil? Let’s welcome, “the two markets”!

I should be honest admitting it hasn’t been easy finding out how to understand the way oil prices are established. I tried to do my best, and here I am, with an explanation that will give you hints to understand the complexity of the oil market.

The trade of future sales of oil barrels has become a popular standardized and exchange-traded financial instrument that allows market participants to buy or sell the commodity. Asian countries are rising their demand for oil. An example is China, a developing country with an expected economic growth in the coming years and thus, a rise in the worldwide demand for oil.

In the financial oil market, investors trade through complex processes. One of them is through contracts for differences (CFD), which are agreements between an investor and a provider to exchange the difference value of a financial product between the time the contract opens and closes. The investor never sees the asset (the barrel of oil), but they receive revenue based on the market changes of that product. If the price increases, the investor receives a profit, selling the CFD, but if it decreases, he gets a loss. Hence, it is in the investors’ interest to predict performance well.

CFDs are not available in the US due to government regulation. They provide the facility to speculate on the price of futures contracts, but many CFDs contain smaller sizes than futures contracts, which prevents compromising oil prices at higher levels.

What are Futures Contracts?

They are agreements to buy or sell pre-established amounts of raw materials, like crude oil, wheat, and corn. Futures contracts take the name of their expiration month, predetermined along with the price at the time of the agreement. Commodity futures are used to hedge an investment position or to bet on the directional move of the underlying product. Oil has a significant risk of price volatility. As a result, there is a big chance of having large gains or large losses as an outcome of the market performance.

On the 20th of April of this year the benchmark for US crude prices, the West Texas Intermediate (WTI) dropped to around $40.00 below zero, reflecting a decline in oil prices in other benchmarks globally. The Chicago Mercantile Exchange (CME Group), considered the world’s biggest financial derivatives marketplace, has received a series of critics about management strategies concerning oil futures contracts. It increased after the last large decline in oil prices. For instance, Harold Hamm, the executive chairman of Continental Resources, Inc., recently requested an immediate investigation of the WTI crude oil futures trades on the CME Group for possible market manipulation and computer programming failures in the WTI prompt month May 2020, and oil contracts on the CME. Hamm stated that this is the first time that the WTI crude oil price was settled negative, which $40 decline per barrel occurred in 22 minutes of trading (dropped by 306% from 18.27 to -$37,63, as shown in the figure below). This fact, combined with the CME’s unusual announcement only hours earlier and the sudden switch in computer models during a period of raised volatility to the Bachelier computer model, influences in the Calendar Monthly Average (CMA) pricing of the physical barrel. Furthermore, it largely raises the suspicion of market manipulation or a flawed new computer model. It also affects the reliability in commodity futures markets, causing drastic economic consequences globally. 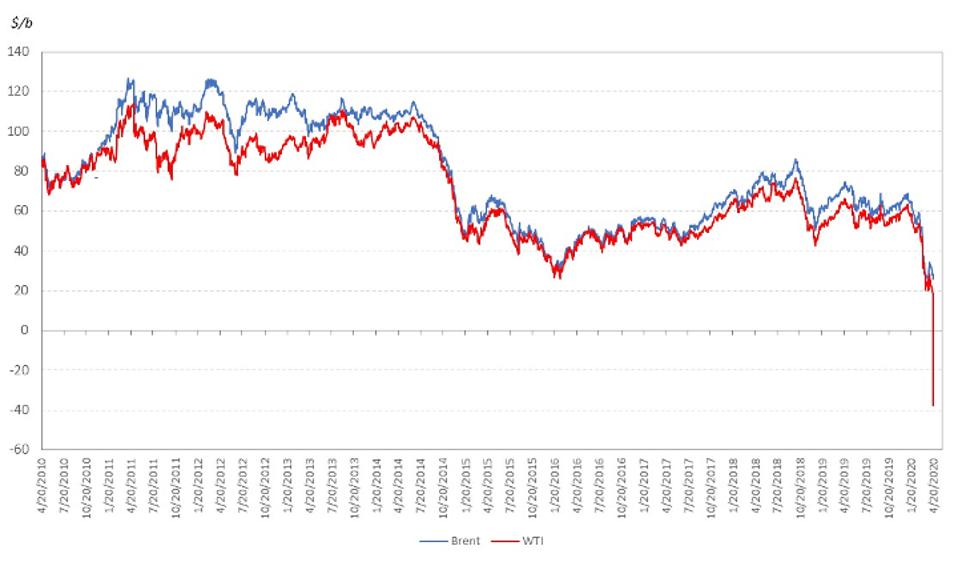 The response from CME Group Chairman, Terry Duffy, in the famous journal, CNCB, was that they have been working with the US government to handle the unexpected changes in oil prices from two weeks ago. He mentioned that exchanges are not for retailers, which means that traders are experienced people who work strategically to make out the futures market, leaving a small chance for inexpert market players to make losses. He also said that the negative oil price is a result of the correct operation of the market since people may not stand to pay more than the prices reflected in the financial market.

However, unexpected events in Geopolitics (wars for gaining market share) also play a fundamental role to determine volatility of prices, like in the case of the Russia-Saudi Arabia oil price war of this year. It is an economic war that began in March by Saudi Arabia in response to Russia’s refusal to drop oil production to keep moderate prices in the wake of the global pandemic, coronavirus. Elements like the above mentioned and market speculations make it difficult to track the highly fluctuating oil prices. Thus, the establishment of barrel prices is a value determined by different factors that depend on the perception that humans have on the value of petroleum. However, it does not mean that the commodity does not have financial worth, but factors like Psychology also influence the change of prices. So that, it is complicated to find an answer to puzzles such as the volatility of oil prices. 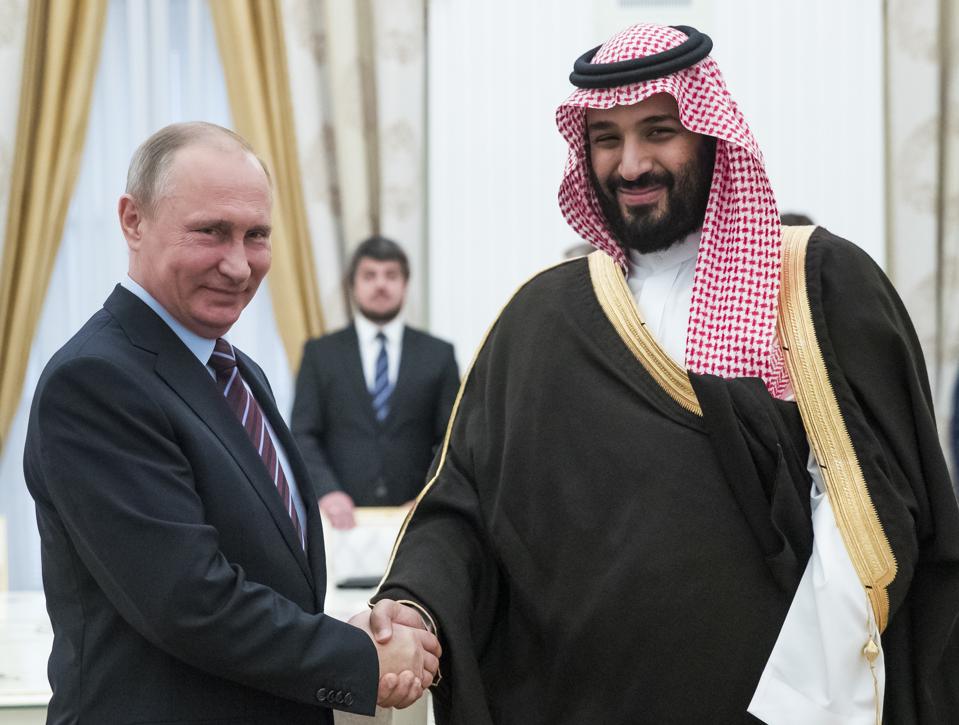 How can things get better?

Given the situation that turned the world upside down, Continental Resources, Inc., which is a top American oil producer, urged the market to change to a daily weighted average price. So that, it should reflect the trading value experienced throughout the monthly trading to prevent such extreme changes in oil prices. The Commodity Futures Trading Commission will make the investigation of WTI crude oil on the CME activities to develop future improvements in the market performance.

On the other hand, governments should act to prevent that fluctuations in prices impact hugely in the economy. Price freezes, subsidies, tax reductions, or strategic oil reserves? Incentives may work, however, the case of oil-dependent countries becomes harder to solve, especially when the world may end up in an economic crisis. So, the diversification of the economy sounds as logical as tough to implement. For businesses, options such as hedging oil prices help them save money, like in the case of Southwest Airlines, which practices allowed the company to save $675 million in 2006.

What did we learn from the latest global crisis?

In 2008, the use of incentives to use alternative energy saved millions of dollars to governments around the world. Demand in eolic, solar and hydraulic energy increased as authorities began to adopt new sources of energy in exchange for reducing oil consumption. For instance, the extra spending on clean energy, following the last financial crisis, contributed positively to the broader recovery, especially through efficiency programs, which bolstered the badly hit construction sector. Governments also stimulated the development of key low-carbon technologies, unlocking the growth in wind and solar PV that we have witnessed over the past decade. At the same time, stimulus-funded investments to develop and improve gas and electricity networks enhanced the resilience of energy systems. Also, gas emissions declined by 400 million tonnes in 2009, but they increased more than four times the next year, which was the sharpest upswing in history. For that reason, it is necessary to make smart policy decisions to lead to a structural decrease of emissions once the intensity of the pandemic begins to drop. Plans for a recovery, the creation of jobs, and the improvement of cleaner and resilient energy systems may help to reduce the dependence on carbon energy and diminish the probability to suffer such big impacts in the economy.