Big headlines are decorating the front page of the website of the International Labour Organization (ILO): “Ethiopia celebrates its 99th anniversary of being part of the ILO!” Approaching the centennial of the Ethiopia-ILO partnership, it is only fair to look into the progress that has been made in terms of labour standard improvements in Ethiopia’s industrial sectors.

With a recent shift from agricultural to industrial production within Ethiopia, labour conditions in the country are adapting accordingly. Ethiopia is a so-called “late-late comer” in the global production network of the apparel and textile sector. The country only took off after 2009 when China began massively investing in the garment production industry. Now, a little over 10 years later, Ethiopia is becoming a leading global production hub, scoring second after Bangladesh in attracting foreign firms to produce and invest in the country. Big players such as PVH (owning Calvin Klein and Tommy Hilfiger) as well as H&M started manufacturing in Havassa Industrial Park, one of the leading Special Economic Zones (SEZ) for garment production in the region. As the flow of foreign capital is increasing, many believe in the narrative that Ethiopia is becoming the “African lion” or “Africa’s China” due to its leading global textile and apparel mass production. 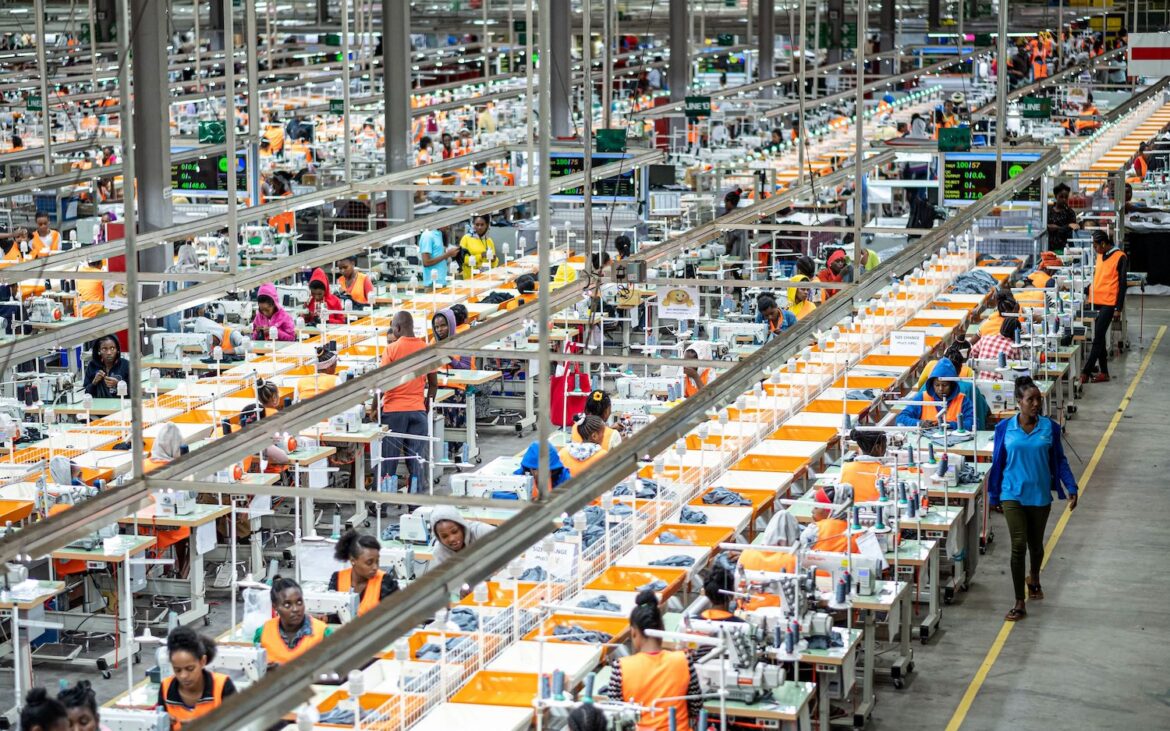 A picture taken on October 1, 2019, shows a general view of a garment factory at Hawassa Industrial Park, the production site of fashion giants such as H&M and Tommy Hilfiger (Mihretu, 2021)

But at what cost is this rapid industrialization taking place and how is it (in)congruent with the conventions of the ILO? Ethiopia marks the country with the lowest global monthly average wage of US$ 26. Despite slight variations depending on the industrial park and factory, the starting wages for a garment worker (mostly women) remain close to US$ 1 per day. As such, the average monthly wage is barely enough to share a small room with 5-7 other workers. Hardly passing by is nothing out of the ordinary for a garment worker in Ethiopian Industrial parks. Daily cases of fainting due to hunger are also no rarity in the factories.

After nearly 100 years of being part of the UN body’s Labour Organization priding itself on increasing labour standards worldwide, it would be expected that a longstanding member state would be more advanced in its basic labour and human rights enforcement mechanisms. 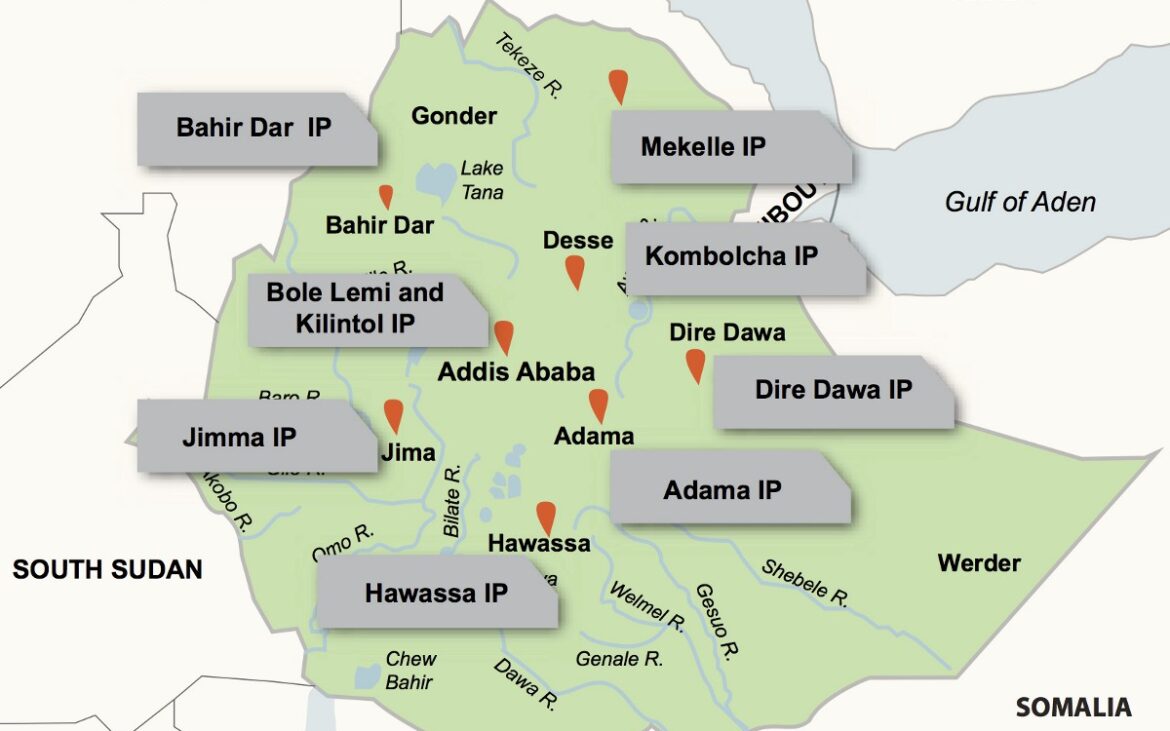 A Map of existing and planned industrial parks specialized in the leather and textile production in Ethiopia’s Special Economic Zones; to be completed before 2030 (IPDC, 2016)

However, the ILO has been criticized for being slow, bureaucratic, and lacking the capacity to follow through on the ground since its birth. The Singaporean Prime Minister George Yeo famously drew the comparison of the ILO with “an old lady with no teeth” in 2007. The ILO struggles with a discrepancy between convention and application: governments vote for a convention in Geneva and do not put that into practice back home. Ethiopia is a prominent case of such contradiction. It has ratified 22 ILO Conventions including 8 Fundamental Conventions, among which are the Freedom of Association and Protection of the Right to Organize Convention, 1948 (No.87) and the Right to Organize and Bargain Collectively Convention, 1949 (No.98). These are some of the most contested ILO conventions in Ethiopia (but also in countries such as Myanmar). Ethiopia’s government adopted a strong anti-trade union mentality out of fear that the existence of a highly organised labour institution could disrupt the smooth industrial production process and scare away foreign direct investment and firms. As a result, the government developed various forms of repressive mechanisms to weaken the Confederation of Ethiopian Trade Unions (CETU). Labourers are systematically prevented from being initiated as members and CETU leadership has been weakened through dispersion and administrative and financial manipulations. Furthermore, industrial complexes have the capacity to threaten workers by cutting the already minimum wage – thereby deterring Union Formation further. In a similar vein, Ethiopia’s state-led industrialisation has deliberately weakened the Ministry of Labour and Social Affairs (MoLSA), which is in charge of enforcing labour standards. Consequently, MoLSA remained silent about the labour rights abuses that take place inside the factory gates and stayed reluctant to take protective measures to ensure that investors comply with Ethiopia’s signed ILO conventions. Ethiopia is furthermore failing to enforce ILO’s Employment Service Convention, 1948 (No. 88), by participating in a global race to the bottom regarding labour wages, underscoring its South-East Asian counterparts by far (in comparison, the monthly average wage in Myanmar is $96 versus Ethiopia’s $26). According to a survey conducted in Hawassa Industrial park in 2017, workers are frequently fainting due to poor working conditions, as well as “being too tired from walking three hours a day to come to work and to go back home [and] the lack of energy and fainting due to the workers not eating properly because they cannot afford to eat two meals per day.” This is possible since Ethiopia is not a signatory of ILO’s Minimum Wage Convention, 1928 (No.26), nor is there a minimum wage stipulated by law for the private sector employment, which makes Ethiopia an attractive production destination for investors and buyers alike. 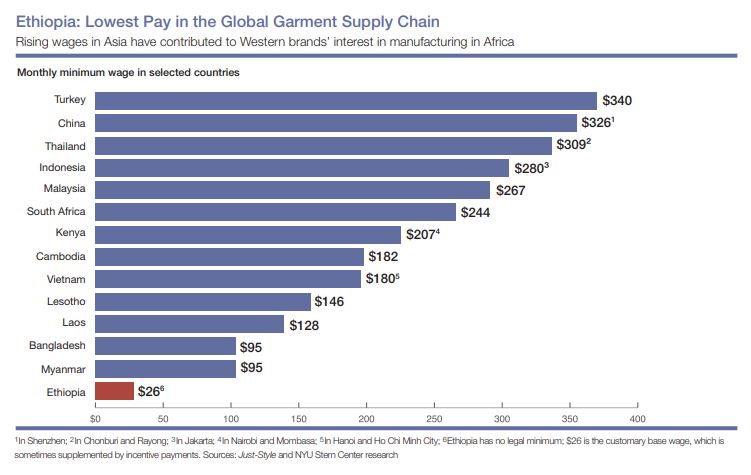 A comparison of monthly average wages of the garment supply chain across countries (NYU Stern, 2019)

The frequency and normalization of labour rights abuses of garment workers in Ethiopia’s textile industry lead to a broader question underpinning the legitimacy and effectiveness of institutions such as the ILO as a whole. The purpose of the UN body is to bring together governments, workers, and employers with the aim to create compliance with a framework of worker rights, protection against exploitation, and the freedom to form unions. The case of Ethiopia clearly demonstrates the contradiction and inefficiency of the transnational organization not having solved any of the aforementioned core values despite being part of the ILO for nearly a century.

Cherrypicking which conventions to oblige with will merely serve as an act of publicity to attract even more firms that will contribute to a never-ending vicious cycle: with labourers having to carry the burden of Ethiopia’s ambitious race to the bottom and the ILO acting as a passive bystander observing the abuses without the power to change a thing.

What happened at COP26? Previous
Tertiary Institutions in Australia: Education or Industry? Next

An exploration into the problematic priorities of oil sales.

Neom: A Utopian Clash between Tradition and Modernity

The shadow side to the utopian dream city Neom