A Russian colonel charging through the smoke of cannon shells into Japanese positions, a Swedish anthropologist trekking through the Chinese frontier on a secret mission, a friend of both Winston Churchill and the Czar of Russia, a monarchist conspirator in times of bolshevism and a ruthless leader in times of civil-war, the vanquisher of foreign oppression, the savior of Finland. What did these men have in common? They were one and the same: Mannerheim.

Carl Gustaf Emil Mannerheim was born in the south-west of Finland. The year was 1867, and Finland a Grand Duchy of the Russian Empire. Mannerheim, however, descended from a long line of Swedish aristocrats, and was thus a native Swedish speaker. His initial military experiences were entirely unsuccessful, being kicked out of the Finnish Cadet academy. This did not deter him, as he left to study in the St. Petersburg Cavalry school. In his departing address to his former classmates, he concluded with the ominous: “Fare thee well. Sincerely, Gustaf, the Traitor.”

Graduating, Marrying and fathering two daughters, Mannerheim’s life remained largely uneventful, barring an unfortunate equestrian accident in Germany that precipitated a meeting with the Kaiser, alongside his presence at the coronation Nicolas II, the last Czar of Russia. Soon approaching his forties, Mannerheim was reportedly plagued by debilitating bouts of depression resulting from a profound sense of purposelessness. However, his chance came upon the surprise Japanese attack on Port Arthur that initiated the Russo-Japanese war of 1905. Although his family and friends, most of them opposed to the Russian occupation of Finland, begged him to leave the army and return home, Mannerheim would have none of it. He acquired a promotion and reassignment to the front, promptly heading to the Far East. 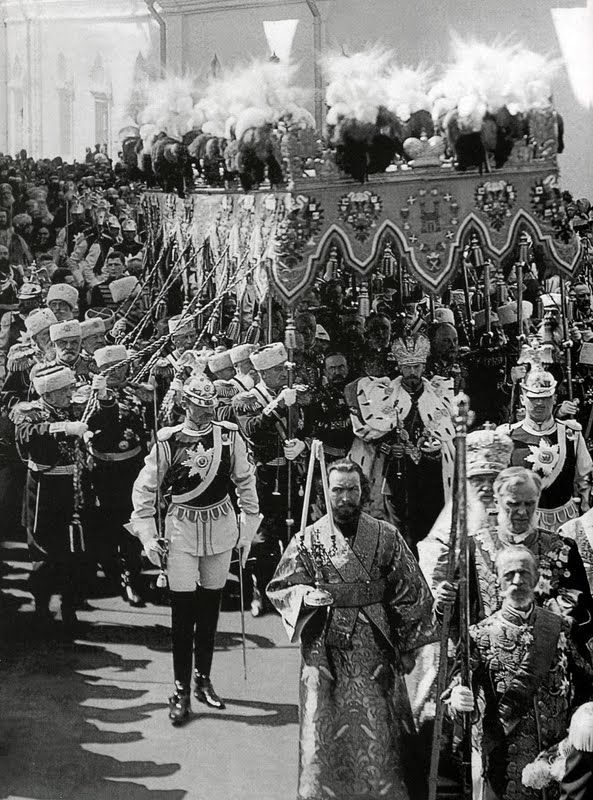 Mannerheim at the Czar’s right during his coronation

His initial days in China saw no combat, as both sides prepared their strengths for the incoming battles. When the time finally came, Mannerheim and his men were among the first thrown against fortified Japanese positions on horseback. Another Finnish officer, serving alongside him, described Mannerheim as a man possessed. He told stories of his famed assaults, where Mannerheim would, leading the charge, lose great numbers of men massacred against the fire of automatic weapons, yet always come out unscathed. Incidentally, Mannerheim himself wrote, astonished, to his family, stating that no matter how hard he pushed the enemy, they had not been able to harm him. His invincibility, and the effectiveness of his unit, was not enough to save the dire situation of the Russian forces, forced to retreat on multiple fronts as casualties mounted. Mannerheim was fully aware of the impending catastrophe, yet remained at his post, covering the retreat of other units. When he was finally repatriated, it was not the Japanese shells nor bullets that forced his hand, but rather a common ear infection.

Returning to St. Petersburg he had his first experience with Communism, travelling through the short-lived republic of Chita in south-eastern Russia. The chaos he witnessed left him heavily skeptical of the revolutionary spirit arising in his Finnish homeland. Nonetheless, after a brief convalescence period, Mannerheim was promoted to Coronel and given a new mission. He was to travel back to China and assess the extent of the threat posed by the chaotic nation. To evade British and Japanese spies, Mannerheim was to pose as a Swedish anthropologist travelling with the French expedition of the young Paul Pelliot. Both men kept a diary throughout their joint venture, which highlighted the worst aspects of their characters. Pelliot described Mannerheim as an inflexible man, easily irritable and devoid of compassion for the local populace. Mannerheim’s own diary contradicted the Frenchman’s allegations, demonstrating a deep understanding of both Chinese culture and customs. Although his entire journey would have, and has, filled entire adventure novels, his meeting with the Dalai Lama stands out. The tall Fin met the Dalai Lama in 1908, bringing him gifts and teaching him to shoot. The spiritual leader wrote of Mannerheim as a graceful, yet serious man, deeply knowledgeable but still open to learn. They vowed to meet anew, but their paths never crossed again. His mission lasted two years, and resulted in a lengthy report disqualifying China as a threat to the Russian Empire, while still outlying an efficient and ambitious strategy to conquer the region in case of war.

Mannerheim at dinner with Chinese nobelmen

In 1914, as the First World War began, Mannerheim was one of the highest-ranking Finns in the Russian Empire. He was at the time assigned command of Russian units stationed in Poland, and had remained there, preparing his men, when war broke out. Amidst the series of failures that marred Russian military efficiency, Mannerheim’s units remained a glaring exception, winning consecutive victories against superior enemies. However, as the war dragged on, bigger issues started to arise. He was distinctly aware of rising communist sympathies among the lower classes, alongside the independence movement brewing in Finland, in which much of his family was taking part. Yet, as the October revolution of 1917 rolled around, Mannerheim remained in the front-line with his men, intent on snatching one last victory for his beloved empire.

It was not be, as he was forced to report back to St. Petersburg by the new government. Mannerheim tried his best to stir anti-revolutionary sentiment among his fellow officers across the country, but was faced with his compatriot’s fear of Bolshevik retaliation. In December 1917 Finland declared independence, and Mannerheim knew the age of the Russian Empire was over. Angry yet focused, he fled back to his native lands before the order for his arrest was enforced. Upon his arrival he found disarray and the burgeoning of a civil-war. He was also the highest-ranking officer in Finland, and so quickly became the de-facto leader of the armed branch of the Finnish conservative camp, often nicknamed the “Whites”. The ensuing 1918 civil war against the “Red” communists marked the most brutal episode in Finnish history, as 36,000 people perished in the span of three months. By the end of the conflict, Mannerheim had led his outnumbered troops to a crushing victory. However, during this hostilities his reputation would forever become tarnished as his troops summarily executed many socialist soldiers and sympathizers, mostly without trials of any kind. This period came to be known as the “White terror”, and to many in the lower classes, Mannerheim inevitably became the “White Devil”.

As the war drew to a close, Mannerheim resigned as commander-in-chief and toured the west, securing recognition for the young Finland from France, the United Kingdom and the United States. He also secured much needed food supplies for his homeland, given that the conflict had ravaged agricultural fields and left many workers dead. He never became truly convinced by democracy and its cumbersome institutions, remaining forever a devoted monarchist, yet consistently refused calls for him to depose the government and become dictator from the far right. In the 21st century, his rejection of absolute power sets a powerful precedent for those leaders enticed by the burgeoning of populist radicalism. It was at this time that he divorced his wife, remaining unmarried until the end of his life. Withdrawing from the public eye, worried by the increasing German influence in the country, he devoted himself to charity work, aiding to mend the wounds he had inflicted upon his people.

However, his ultimate chance at redemption came with the breaking out of the Winter War in 1939. Mannerheim was brought back as commander-in-chief a month before hostilities commenced, and set about preparing his army for war. In his personal diary he commemorated the occasion with somber words: “and now for the fourth time, I am at war”. He was aware that the Russians were ready to field double the number of troops, and had better equipment. Thus, Mannerheim employed his men in guerrilla style attacks, causing massive casualties among the enemy. Even he was surprised to find how extremely effective his rugged troops were against the superior foe, yet knew that the situation was untenable. Four months after the beginning of the conflict, refusing to lose more men, Mannerheim asked a surprised parliament to sue for peace. Finland ultimately conceded defeat, lost vast territories, yet managed to rally behind a united banner, forgetting quarrels of the past, and survive. Throughout history, few leaders have ever found redemption for their past mistakes quite like Mannerheim. As he elegantly postulated: “We do not need to ask any longer what position a man took fifteen years ago”.

Peace would not last, and in 1941, Mannerheim once more led Finland to war against Soviet Russia, this time in a joint offensive with Nazi Germany. Eternally wary of German influence, and finding Nazi antisemitism distasteful, refusing to collaborate in prosecution of minorities, he nonetheless understood the need to retake lost territories and avoid angering the Germans, dominant at that stage of the war. Lacking the ability to engage in ambushes and smaller actions, Finnish forces suffered heavy casualties yet maintained operations for close to three years. Although he dreamed of marching into his beloved St. Petersburg and returning it to its former monarchical glory, Mannerheim knew that Germany would eventually lose the war, and so once again recommended peace. In 1944, the president of Finland resigned and Mannerheim took over control of the country, signing peace with the Soviets and expulsing the Germans from Finland in what came to be known as the Lapland War.

Mannerheim at the front

At last, Mannerheim had fought his final war, and as German forces retreated into Norway, the country was finally at peace with Russia. Soviet demands for reparations and prosecution were severe, with many Finnish politicians and military officers being judged as war criminals. However, Mannerheim was never prosecuted, even after having led the Finnish armed forces in both conflicts, due to his insistence on peace, his status as a national hero, and the admiration Stalin had for him.

Resigning the presidency in 1946, considering his task of strengthening the nation complete, Mannerheim finally retired at the age of 78. He spent his retirement editing and preparing his memoires for publication. Incidentally, the 800-page behemoth account of his Asian travels remains celebrated to this day. Besieged by the scars of many years of service, he suffered from ill health until his final death in 1951, in Lausanne, Switzerland. He was buried with full military honors in Helsinki, having been the only Finn ever to be awarded the rank “Marshal of Finland”. It took seven men to carry the 82 decorations he had been awarded throughout his career to his grave. The funeral was attended by thousands, with an emotive eulogy being delivered by a left-wing Social Democrat politician, who acknowledged the role he had played in the liberation of Finland and his work with charity. This moment marked the culmination of Mannerheim’s work to unite Finnish society both at times of war and peace.

Ultimately, Mannerheim’s life was as varied as it was intense. He fought across vast continents against all manner of foes. However, his fate was forever linked to his homeland, which he never abandoned, returning to liberate and lead it to prosperity. Even though, following his death, he was universally regarded as a non-partisan figure, a recent resurfacing of civil-war rifts has seen him become a divisive figure once more. Thankfully, to this day he is still commemorated with various statues across the country, alongside having the street upon which parliament sits named after him. Regardless of darker chapters, Mannerheim will forever shine as the man who led his nation to battle against the communist menace, forging Finland’s freedom.

“Only Finland, superb, nay, sublime in the jaws of peril – Finland shows what free men can do.”

An Economic Tsunami: COVID-19 in Colombia Previous
Oil prices go negative, how can we see the light at the... Next

Second-year student of Economics from Getxo, Spain. Passionate about finance, political economy and the future of taxation.